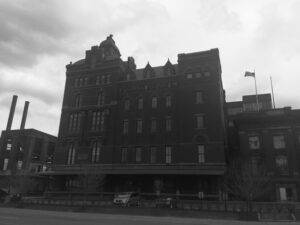 In 1857, a man named Charles Stegmaier started a small bottling business in Wilkes-Barre. By the turn of the century he had one of the largest brewing businesses in Pennsylvania. His brewery, a massive complex that dominates the sightline of the surrounding area, was operated by four straight generations of Stegmaiers and workers. The factory employed a massive amount of people from the Wilkes-Barre area, and many people considered the brewery the center of their lives. Unfortunately, the Stegmaiers were bought out by Lions Head Brewery, resulting in a massive layoff. The Stegmaier brewery we see today is no longer in operation, and serves as a historical landmark, reminding its visitors of past times when the industry was still booming.