“Wilkes-Barre, Pennsylvania 1889,” Map by Fowler, Downs & Moyer, and A. E Downs (Retrieved from the Library of Congress)

“Wilkes-Barre in Thirty Images” is an exhibit of writing and photography presented by students in the Professional Writing Program at King’s College. The exhibit will be held on the fourth floor of Hafey-Marian on the King’s College campus from May to December 2016. During the spring semester 2016, students in Dr. Noreen O’Connor’s Literary Journalism course read and examined photo essays and photo curation in texts including [more …] 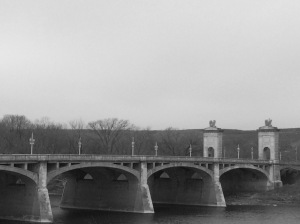 By Owen Vaughn
The 1,400 foot long Market Street Bridge is one of the longest and most elaborately decorated bridges in Pennsylvania. It is a daily sight for most people who live in the area, and carries more significance than one would expect at first glance. The bridge serves as a subtle memorial, a bridge to the past commemorating American heroes who risked everything for the good of their country [more…] 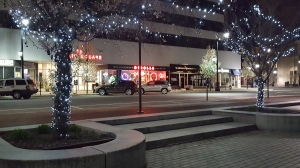 By Shaniese Ricketts
The quietness in the air gives birth to new life for the city. The whispers of renovated businesses and new apartments give hope to the Diamond City. There is a gradual rethinking of Wilkes-Barre. The raining down of loss and destruction is replaced by the sunshine of life and promise. The city may not shine in the day, but it sparkles at night [more…]

By Jessica Mulligan
An American flag sits atop the building, a symbol national pride. Below, the building has seen immense evolution and magic, but some secrets are left untold. This is small-town America, and this little theatre is what this country and this city are all about. The F. M. Kirby Center has stood for over a century and a half, through trials, tribulations, and devastation [more…]

By Nathaniel Eric Seals
On a warm summer evening looking out on the river commons, both sides of the bank are lined with families who know the splendor of the catch. The Susquehanna River has a rich and diverse population of fish. The fish worth catching come out at night and in this river lay monsters. These channels and flatheads will snap your line clean off if you’re not savvy with a rod and reel [more…]

By Anastasia Humphrey
[…] Over the years of commuting to King’s College every day, I’ve noticed that Wilkes-Barre is an interesting place. It’s full of interesting people, and interesting things, such as this giant, old-looking, and run-down mug that is apparently for sale from an unknown seller and for an unnamed price [more…] 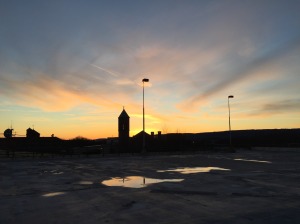 By Emily Letoski
Solomon Boscov probably didn’t imagine that his family business would last over a hundred years, but it has. Today, Boscov’s is one of the last family-owned department store chains in the United States. There are now forty-four Boscov’s department stores—twenty-four of which are in Pennsylvania, including the one located on Main Street in Wilkes-Barre [more…]

By Sarah Gyle
Scott Street in Wilkes-Barre is chock-full of local history, legends, secret hideaways, and hole-in-the-wall shops. It used to be, and might still be, in the Guinness Book of World Records for having the most bars on one stretch of street (this could be because the street extends through to Plains) [more…]

By Samantha Bucher
Every time I felt alone and depressed, I’d take a walk. The city became my friend. I had no one to turn to, so I turned to music and the places around me. I’d plug my headphones in and explore the city. Some days I would find myself sitting in the back corner of Musical Energi, paging through records on the tall white shelves, searching for a Genesis or Billy Joel album I didn’t already have [more…]